2003 Diploma of honour and valuable gift from mayor of Kyiv

2006 Gershenson Award of National Academy of Sciences of Ukraine

The influence of exogenous biological factors on mutation process.

In was found that exogenous viruses, DNAs and some mitogenic proteins are able to influence on the spontaneous mutation process and mutagenesis induced by alkylating compounds in mammalian cells in vitro. More detailed investigations were performed to study the possibility of mutation process regulation by impact on DNA repair some mitogen proteins and inhibitors. It was shown jointly with American scientists that a modified base O6-benzylguanine significantly strengthened the mutagenic effect induced by nitrosoguanidine, by reducing enzymatic activity of O6- methylguanine-DNA methyltransferase (MGMT) which plays one of the key roles in cancer cells resistance to alkylating chemotherapeutic drugs (Fig. 1). Currently, together with the Department of Biomedical Chemistry of IMBG NASU, a new generation of MGMT inhibitors are being developed. 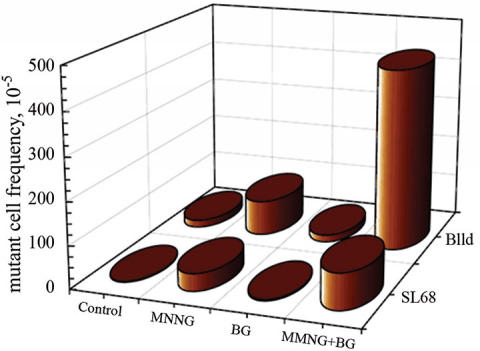 Fig. 1. Enhancing of MNNG mutagenic effect in the presence of O6-benzylguanine in cells with different repair systems activity

The regulation of the expression of the gene for repair enzyme MGMT.

We have shown that exogenous cytokines LIF, SCF, IL-3, EMAP II and IFN-a2b (a substrate of preparation “Laferobion”) are able to influence on the MGMT gene expression at the protein level. EMAP-II showed an ability to modulate the level of MGMT gene expression in populations of human cells in vitro differently depending on the experimental conditions. Cytokines LIF, SCF, IL-3 and “Laferobion” usually were causing downregulation of MGMT gene expression in studied human cells. We detected unknown ~50kDa protein which is induced by stress factors as MGMT and recognized by monoclonal anti- MGMT antibodies (clone MT23.3, “Novus Biologicals”, USA). A search for new regulatory elements within the promoter of the mouse and human MGMT gene was performed to learn the complex molecular mechanisms of regulation of this gene expression at the transcriptional level, what perhaps will explain the variation in its expression. Among the detected regulatory promoter sites are those that potentially interact with inducible and tissue-specific transcription factors and alter the level of gene expression in response to various factors. Based on the obtained results we offered the hypothesis about the possiblility of the MGMT gene regulation by various biologically active agents, which are commonly used in supporting therapy of cancer (Fig. 2). 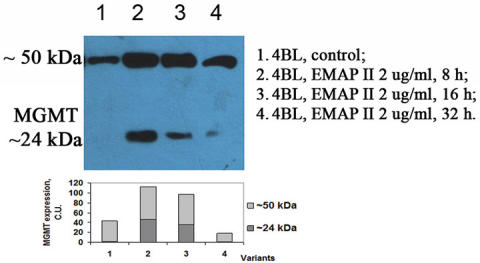 Investigation of the disruptions of signaling and structural functions of adherent junctions proteins as potential mechanism for some heart pathologies development.

With using conditional knock-out and transgenic animal models we have shown that the structural role of heart adherent junctions is crucial for early cardiogenesis of mammals: loss of N-cadherin in the embryonic heart leaded to the disruption of its development and to embryonic lethality. Cardiospecific deletion of one allele of b-catenin gene resulted in the delay of development of the adult heart, increased expression of the set of embryonic genes (ANP, BNP, b-MHC) and decreased activity of WNT-b-signaling pathway in mutant animals compared with control ones; at the same time morphological reconstructions of adult myocardium were not detected (Fig. 3). 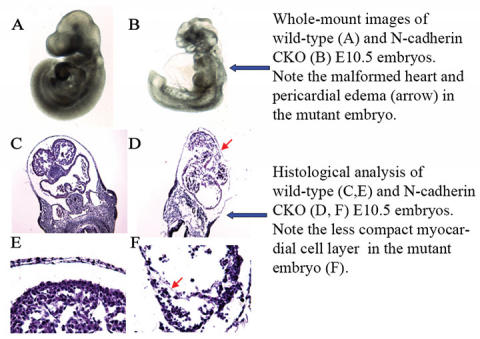 The technologies of obtaining, cultivation and differentiation of human stem cells with the purposes of further application in cell therapy.

We processed the approaches to obtaining lines of undifferentiated mammalian cells and directing them into differentiation by using the original method of medium conditioning and specific cytokines and growth factors. A several immortalized cell lines were obtained, which originated from human and mouse stem and progenitor cells: line 4BL derived from peripheral blood of adult donor, line SK1 – from skin of adult patient; lines G1, G4, G6 and G7 – from embryonic primordial mouse gonads. Cell line 4BL was used for creating skin equivalents, which were successfully tested in clinic on a limited cohort of patients with burn disease. Currently, together with the Institute of Cell Therapy we are developing the technologies of obtaining multipotent mesenchymal stromal cells (MMSK) and hematopoietic progenitor cells from native and cryopreserved human placenta (Fig. 4). 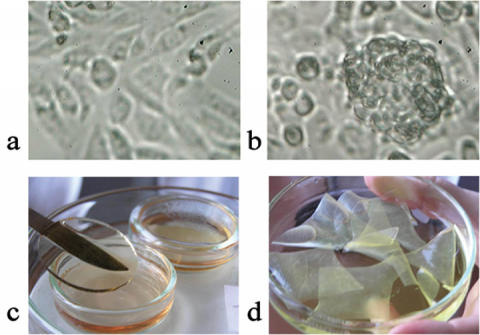 Fig. 4. 4BL cells growth features. Cells can growth as monolayer (a) and with forming of compact colonies (b). For production of dermal skin equivalents for thermal burns treatment cells were cultivated on synthetic (c) and natural (d) membranes

Approaches to improvement of biosystems stability to environmental factors and occupational hazards.

We were the first to investigate the effects of some proteins of different origin especially lectins as factors modulating the mutation and repair processes with using pro- and eukaryotic systems. The influence of several lectins of plant and animal origin on the induction of primary DNA damage and gene mutations caused by mutagens with different mechanisms of action (salts of heavy metals and alkylating compounds) was revealed in cell populations and individual mammalian cells in vitro. Gene-protector properties of Sambucus nigra bark lectin and antimutagenic properties of the same lectin and lectin from perch roe were detected and characterized (Fig. 5). 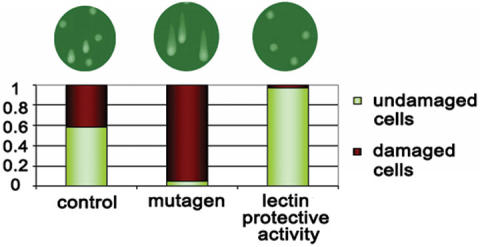 Creation of a model of mutation process and prototype of software for working with databases.

The analysis of experimental data of mutation process manifestation in cell populations treated by different biological factors was performed. The dependence of a mutation process on heterogeneity of populations, energy ensuring, reparative capabilities was shown. In collaboration with the Institute of Cybernetics of V. M. Glushkov NAS of Ukraine the computational modeling of mutagenesis dynamics was carried out, based on obtained facts and hypothesis. As a result, the possibility to predict the effects of mutagenesis in time have occurred, based on empirically derived characteristics of populations; as well as to establish the data bank, reducing time and financial costs on conducting investigations. The software for the calculation of experimental data was also developed. (Fig. 6). 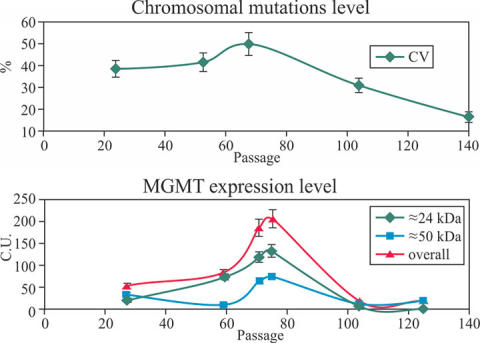