1994–1995 Accountant, Pryluky branch of О.N.C. of Ministry of Statistics of Ukraine

2003–2007 Head of the Laboratory of Technology Transfer, Innovation and Intellectual Property, Institute of Molecular Biology and Genetics, NASU, Kyiv, Ukraine

since 2007 Head of the Department of Industrial Property Researches, Center of Intellectual Property and Technology Transfer, NASU, Kyiv, Ukraine

Laboratory of Technology Transfer, Innovation and Intellectual Property is engaged in obtaining and protecting the rights for the objects of intellectual property, created at the Institute of Molecular Biology and Genetics of NASU. During the years since the Institute was founded, the achievements of the scientists resulted in/were crowned with two discoveries, certified by the State Committee of Discoveries and Inventions of the USSR.

The notable scientists, Academicians of the NASU, made these discoveries.

The discoveries were made in the following fields:

For forty years the scientists of the IMBG NASU have received more the 250 provisional patents (inventor’s certificates, patents of Ukraine, international applications, submitted according to the Patent Cooperation Treaty). Also, a number of innovations, proposed to upsurge scientific research efficiency, have been registered.

During the last few years, according to the Patent Cooperation Treaty (PCT), the Institute has submitted several international applications, in particular, “Synthesis, pharmaceutical composition and method of application of (2’– 5’) oligoadenylate analogues”, by Z. Yu. Tkachuk, E. Kvasyuk, G. Kh. Matsuka, I. Michaylopulo; Microsensor for detection of D-amino-acids” Сespuglio Raymond, Scuvailo Oleg, Soldatkin Alexey. “Biological preparation for plant growing and protection “Kleps” (patent N 4418A) by N. O. Kozyrovska, V. V. Negrutska. They were prize-winners of “Discovery 2002” contest, and as women-inventors were awarded the medal of the International Organization of Intellectual Property. Biological preparation Kleps is being used in the agricultural complex in Ukraine, it insures a rise in grain, vegetables and industrial crops up to 10–20 %. 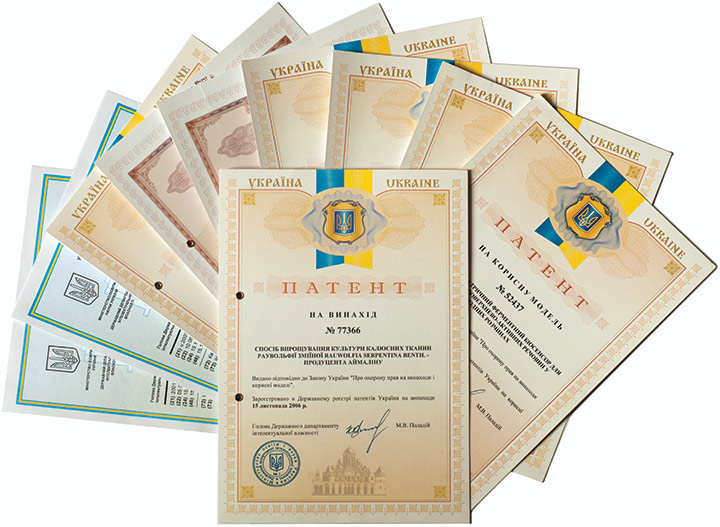