IMBG NASU is very active in international cooperation. For many years IMBG scientists collaborate successfully with their foreign colleagues from France, Germany, USA, Great Britain, Poland, Italy, Greece, Japan and other - about 34 countries in total. IMBG was involved in the EU Framework programs starting from FP5:

IMBG has also many other international grants including those of CNRS, NATO, STCU, SCOPES, earlier - Welcome Trust, Howard Hughes etc.

In strongly competitive call H2020-WIDESPREAD-2020 (success rate 13%), IMBG won the BIONANOSENS project, «Deeping collaboration on novel biomolecular electronics based on “smart” nanomaterials» #951887 - the only project from Ukraine, funded in 2020 within this work program.

The BIONANOSENS project www.bionanosens.eu (2020-2023) is devoted to the development of the operational network of EU and Ukrainian scientists and innovators aimed at the IMBG positioning as an international Centre for Excellence in analytical biotechnology also beyond national borders. Corresponding IMBG Strategy will be developed in the project`s frames.

Implementation of the BIONANOSENS project will be fulfilled with the support of 4 high-profile research and innovation (R&I) institutes from Europe, which, together with IMBG form the BIONANOSENS consortium:

BIONANOSENS implements tailor-made twinning actions helping to build and strengthen capacities at the beneficiary’s end. Both the overall goal of the project and the single objectives related to it are taking into full account IMBG’s current operational situation. Among these objectives there are following ones:

For Ukrainian stakeholders, strengthening IMBG competitiveness in corresponding research area will be a case of successful story of effective involvement in ERA, improving IMBG responses to the socio-economic needs of Ukraine. Several actions aimed at increasing of IMBG visibility in Ukraine and in ERA also are planned.

BIONANOSENS further exploits the findings of a SWOT analysis, which was conducted for IMBG as part of the COMBIOM project #294932 (FP7).

Also, a new SWOT analysis will be performed in the BIONANOSENS project`s frames. 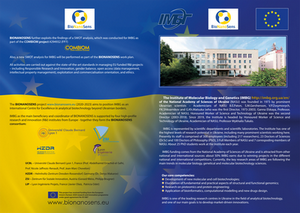 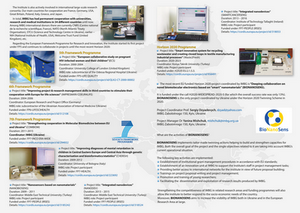